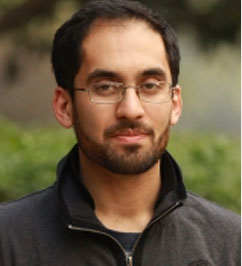 Dr. Ali Hasanain is an Associate Professor and the Head of the Economics Department at the Lahore University of Management Sciences (LUMS). Dr. Hasanain’s research focuses primarily on how public service delivery can be improved through reform initiatives, particularly through technological progress and improvements in the media. He also studies how information and communication technologies (ICT) can improve market functioning.

Dr.Hasanain’s research has been featured in The Guardian, Economist, Huffington Post, various World Bank blogs, VoxEU, VoxDev, Herald, Friday Times, Dawn, and other media outlets, as well as been the topic of the feature story of the World Bank’s global website.

He is a member of Evidence in Governance and Politics (EGAP), a Senior Research Fellow at the Mahbub ul Haq Research Center (MHRC), a member of the research board of PRIME Institute, a Fellow of the Consortium of Development Policy Research (CDPR), and a faculty advisor at the Technology for People Initiative (TPI).

From 2014 to 2016, Dr. Hasanain was a Global Leaders Fellow at Oxford and Princeton universities. He has previously directed the LUMS engagement on the World Bank’s Pakistan At One Hundred Initiative, which sought to support greater debate and study Pakistan’s medium term future, out to the year 2047. He has also previously been a member of the Punjab Government’s Economic Advisory Committee. With his colleagues, Dr. Hasanain designed and implemented an ICT-based monitoring pilot in partnership with the provincial government of Punjab in 2011. The government adopted the intervention and scaled it up province-wide, and it is still in daily use. He also served as South Asia Team Leader for a Global Development Network (GDN) policy research project during 2011-2012.

At LUMS, he teaches courses on the economics of the media, corruption, markets, and the law. He is also the Pakistan country coordinator (and one-time participant) of the South Asian Economics Students Meet.

Dr. Hasanain received his PhD from George Mason University in 2010.