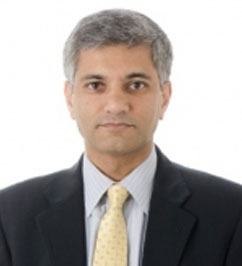 Aasim M. Husain is currently Deputy Director in the Middle East and Central Asia Department (MCD) of the IMF, where he supervises the department’s regional work on the GCC, and on several countries in the region. Prior to joining MCD in March 2015, Mr. Husain served in the European Department—where he supervised work on several Central, Eastern, and Southeastern European countries—and in the Strategy, Policy, and Review Department, where he led the Fund’s policy development work on capital flows and reviewed country work on many of the large emerging market economies. Previously, Mr. Husain served as IMF mission chief for Italy, Egypt, Jordan, and Kazakhstan, and headed the Fund’s work on commodity and energy issues. During 1995-96, Mr. Husain served as Chief Economist at ABN-AMRO Bank NV, Pakistan, and in 1999-2000 he served as desk economist on Pakistan at the IMF.

Mr. Husain is from Pakistan. He received his Bachelor of Arts degree in Economics and Mathematical Sciences from Rice University and his Doctor of Philosophy in Economics from the University of Pennsylvania. He joined the IMF in 1990.